...Without exception, all involved in this project give outstanding performances, the supuerb quality of playing easily matching the high musical content from a composer who, on the evidence of this material never writes anything unworthy of full attention. This is riviting, attention-grabbing contemporary chamber music, full of impressionism, great rhythmic ideas and countless mood changes. Although not absolutely necessary to assist the aural pleasure of listening to this distinctive music, the titles infrequently provide a nice descriptive 'pictorial' backdrop for the listener as in \"The Great Octopus\" (who, after swallowing a guitarist, begins to play his instrument), and "Rush Hour", a jittery composition for horn and piano and subtitled "Five O'Clock Drive Getting Nowhere On The Road" and a work that really does sum up the emotions we have all experienced when stuck in endless traffic queues. If you want to listen to first class, modern-day chamber music played exceptionally well, then seek no further. - Steve Marsh, Classical Guitar Magazine

Paul Richards's disc Fables, Forms & Fears is a suave amalgam of influences. The Great Octopus combines acoustic guitar and digital media with boppy rhythms in a sort of techno hocket. Richards is a deft appropriator of style and impression of style, as in Cypriot Structures, a gypsy-inflected piece for violin, guitar, and piano. A constant peppy energy and programmatic humor pervades Rush Hour for horn and piano; the repeated piano notes, for example, are the stopped traffic at a light. The horn hero triumphs in the end and rips away. The rippling clarinet is happy; Falling on Lobsters in the Dark shares the lively eclecticism. 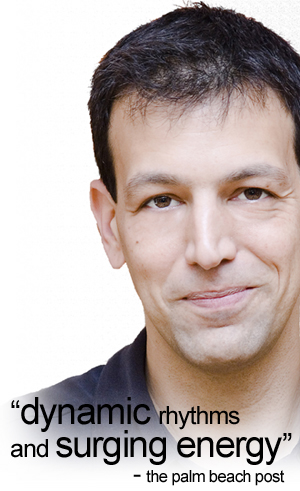 Born in New York City in 1969 to a musical family, composer Paul Richards has been engaged with music since childhood, including forays into various popular styles, the Western canon, and Jewish sacred and secular music through his father, a cantor. All of these experiences inform his creative activities, which have included numerous orchestral, vocal, chamber, and theatrical works. Hailed in the press as a composer with "a strong, pure melodic gift, an ear for color, and an appreciation for contrast and variety," and praised for his "fresh approach to movement and beautiful orchestral coloration," his works have been heard in performance throughout the country and internationally on six continents.
He has been recognized in numerous competitions, including the 2009 St. Mary's University/Kaplan Foundation Composition Competition, the Jacksonville Symphony Orchestra's Fresh Ink 2002 Florida Composers' Competition, the International Section of the 2000 New Music for Sligo/IMRO Composition Award, and the 2001 and 2004 Truman State University/M.A.C.R.O. Composition Competition. Other honors and awards include Special Distinction in the ASCAP Rudolf Nissim Prize, Finalist in the 2006 American Composers Orchestra Whitaker Reading Sessions, Finalist in the Atlanta Chamber Players 2009 Rapido! Composition Competition, Second Prize in the International Horn Society Composition Competition in 2001, First Place in the 1999 Voices of Change Composers Competition, two First Place prizes in the Guild of Temple Musicians Young Composers Award (1994-95, 1995-96) and many others.
Commissions have come from organizations including the Southwest Florida Symphony Orchestra and Chorus, the Jacksonville Symphony Orchestra, the Boston Brass, the 6ixwire project, Florida State Music Teachers' Association and Music Teacher's National Association, St. Mary's University/Kaplan Foundation, Buffet-Crampon International Summer Clarinet Academy, Open Heart String Quartet, Duo 46, Sonoran Consort, Meet the Composer-Arizona, Arizona Repertory Singers, Arizona Commission on the Arts and Catalina Chamber Orchestra. In addition, many university wind programs have commissioned Richards' work, including those of Baylor, DelMar, Florida, Illinois - Champaign/Urbana, Michigan, Nevada - Las Vegas, North Carolina - Greensboro, Northern Iowa, Syracuse and Truman State.
Richards' second opera, with libretto by Wendy Steiner, “Biennale”, was premiered in October, 2013, at the Barnes Foundation in Philadelphia. Richards and Steiner’s first opera, “The Loathly Lady”, received its premiere April 1, 2009 at Irvine Auditorium on The University of Pennsylvania campus. With a strong interest in dramatic works and collaborations with other artists, he composed the score to James Babanikos' film “Somewhere Beyond”, and has recently completed “Ambitions”, an extended song cycle on the poetry of Lola Haskins.
Witch Doctor, a CD of Richards' wind ensemble music, was released in 2013 on the Mark Custom label. Fables, Forms, and Fears, a CD of Richards' chamber music, was released by Meyer Media in 2007. Music by Paul Richards is also recorded on the Centaur, MMC, Capstone, Spitfire, and Summit labels, including a recent recording featuring famed clarinetist Richard Stoltzman and the Slovak Radio Orchestra. His works are published by Carl Fischer Music, the International Horn Society Press, TrevCo Music, Jeanné, Inc., and Margalit Music. Currently professor of composition at the University of Florida, he previously taught at Baylor University, and earned the Doctor of Musical Arts degree in Composition at the University of Texas at Austin, and Bachelor of Music and Master of Music degrees in Theory and Composition at the University of Arizona.

stay up-tp-date with duo46 and friends.