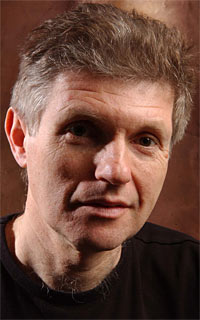 Jorge Liderman, renowned composer and professor of music at the University of California, Berkeley, died on February 3, 2008, in El Cerrito, California.

Born in Buenos Aires, Argentina, on November 16, 1957, Liderman played classical guitar as a child, and began his formal music training at the Rubin Academy of Music in Jerusalem, where he studied composition with Mark Kopitman. After receiving his B.M. degree with honors there in 1983, he continued his education at the University of Chicago, where he studied composition with Ralph Shapey and Shulamit Ran, earning the M.A. in 1986 and the Ph.D in 1988. He joined the Department of Music at UC Berkeley as an assistant professor in 1989.

Liderman used Argentine and Jewish elements in his music, and described his musical grandparents as Stravinsky and Bartók, and later, György Ligeti and Steve Reich. His music is characterized by both rhythmic drive and lyricism. Although it can be challenging to perform, his music is unusually accessible to the listener, who may find it to be imbued with elements of joy and exuberance. In his own words, “I think contemporary music has been divorced from the audience for quite a long time. We’ve been living in a ghetto of composers writing music for other composers.” By contrast, Liderman endeavored, he said, “to write music that is visceral, that can move you not just intellectually but also emotionally and physically. I think something has to grab you on a subconscious level in the music. In my case, it’s usually the music’s rhythm.”

Liderman’s opera, Antigone Furiosa, was written at the request of Hans Werner Henze. A setting of playwright Griselda Gambaro’s surrealistic version of Sophocles’Antigona, it received the 1992 BMW International Music Theater Prize in conjunction with the Third Munich Biennale, and was the subject of a German television documentary.

In 2002, Liderman composed an hour-long, three-part cantata, Song of Songs, using Chana and Ariel Bloch’s new English translation of the famous love poem in the Hebrew Bible. The piece was premiered by the San Francisco Contemporary Music Players and the UC Berkeley Chamber Chorus at Cal Performances.

stay up-to-date with duo46 and Friends